BWD Proves That To Get Noticed In A Big Way, Requires Equally Bold Moves

01 Jul BWD Proves That To Get Noticed In A Big Way, Requires Equally Bold Moves

Posted at 10:10h in Advertising-Marketing by BWD Advertising 0 Comments
0 Likes

To read the article, get yourself the Forbes Africa magazine, July Edition. 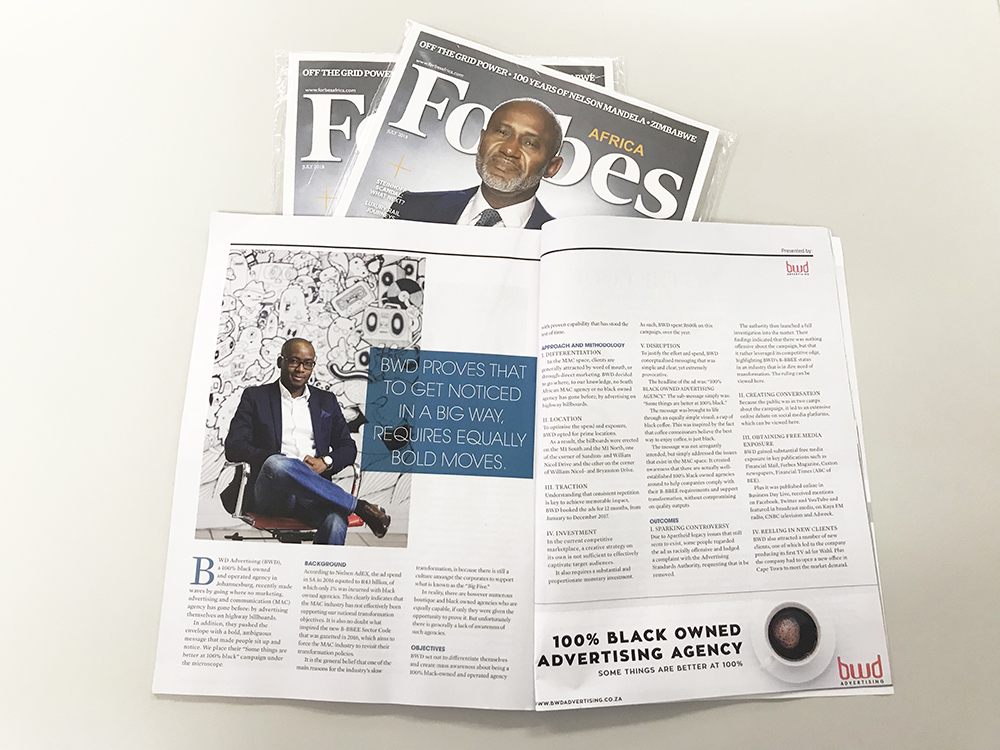 BWD PROVES THAT TO GET NOTICED IN A BIG WAY, REQUIRES EQUALLY BOLD MOVES

BWD Advertising (BWD), a 100% black owned and operated agency in Johannesburg, recently made waves by going where no marketing, advertising and communication (MAC) agency has gone before: by advertising themselves on highway billboards.
In addition, they pushed the envelope with a bold, ambiguous message that made people sit up and notice. We place their “Some things are better at 100% black” campaign under the microscope.

According to Nielsen AdEX, the ad spend in SA in 2016 equated to R43 billion, of which only 1% was incurred with black owned agencies. This clearly indicates that the MAC industry has not effectively been supporting our national transformation objectives. It is also no doubt what inspired the new B-BBEE Sector Code that was gazetted in 2016, which aims to force the MAC industry to revisit their transformation policies.
It is the general belief that one of the main reasons for the industry’s slow transformation, is because there is still a culture amongst the corporates to support what is known as the “Big Five.”
In reality, there are however numerous boutique and black owned agencies who are equally capable, if only they were given the opportunity to prove it. But unfortunately there is generally a lack of awareness of such agencies.

BWD set out to differentiate themselves and create mass awareness about being a 100% black-owned and operated agency with proven capability that has stood the test of time.

i. Differentiation
In the MAC space, clients are generally attracted by word of mouth, or through direct marketing. BWD decided to go where, to our knowledge, no South African MAC agency or no black owned agency has gone before; by advertising on highway billboards.

ii. Location
To optimise the spend and exposure, BWD opted for prime locations. As a result, the billboards were erected on the M1 South and the M1 North, one of the corner of Sandton- and William Nicol Drive and the other on the corner of William Nicol- and Bryanston Drive.

iii. Traction
Understanding that consistent repetition is key to achieve memorable impact, BWD booked the ads for 12 months, from January to December 2017.

iv. Investment
In the current competitive marketplace, a creative strategy on its own is not sufficient to effectively captivate target audiences. It also requires a substantial and proportionate monetary investment. As such, BWD spent R600k on this campaign, over the year.

v. Disruption
To justify the effort and spend, BWD conceptualised messaging that was simple and clear, yet extremely provocative.
The headline of the ad was: “100% BLACK OWNED ADVERTISING AGENCY.” The sub-message simply was: “Some things are better at 100% black.”
The message was brought to life through an equally simple visual; a cup of black coffee. This was inspired by the fact that coffee connoisseurs believe the best way to enjoy coffee, is just black.
The message was not arrogantly intended, but simply addressed the issues that exist in the MAC space. It created awareness that there are actually well-established 100% black owned agencies around to help companies comply with their B-BBEE requirements and support transformation, without compromising on quality outputs.

i. Sparking controversy
Due to Apartheid legacy issues that still seem to exist, some people regarded the ad as racially offensive and lodged a complaint with the Advertising Standards Authority, requesting that it be removed.
The authority then launched a full investigation into the matter. Their findings indicated that there was nothing offensive about the campaign, but that it rather leveraged its competitive edge, highlighting BWD’s B-BBEE status in an industry that is in dire need of transformation. The ruling can be viewed here.

ii. Creating conversation
Because the public was in two camps about the campaign, it led to an extensive online debate on social media platforms, which can be viewed here.

iv. Reeling in new clients
BWD also attracted a number of new clients, one of which led to the company producing its first TV ad for Wahl. Plus the company had to open a new office in Cape Town to meet the market demand.

Sorry, the comment form is closed at this time.